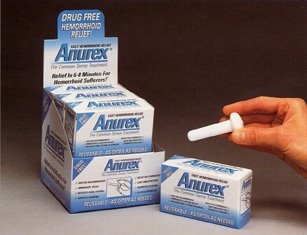 Description:
Anurex the anatomic insole for cryotherapy for hemorrhoids. Anurex is a kind of therapeutic device made of medically approved surgical plastic the size of a small finger. As with contusions, topically applied cold treatment is effective also in case of piles (hemorrhoids).

FEATURES - How does it work?
Anurex cooling the hemorrhoids brings immediate relief. Sealed within the plastic applicator is a scientifically formulated cooling liquid which, when frozen, dispenses a controlled degree of cold directly to the internal rectal tissue. This cooling action causes the blood vessels in the affected area to shrink, which in turn soothes the swollen tissue, reducing bleeding, pain and itching. When used as directed, Anurex allows the inflamed hemorrhoidal tissue to heal. The controlled cold delivered by Anurex applicator is designed for safety and will not harm the rectal tissues. Anurex is free of side effects and easy to use as taking your temperature. Applied regularly gives long-lasting therapeutic effect. Many patients using Anurex was protected from the necessity of surgery.

Form:
Anurex the anatomic insole for cryotherapy for hemorrhoids. Anurex insert is made of plastic approved for medical use and filled with a substance with properties of cold storage. It has a few inches tall, anatomically, cylindrical shape and is completed by a broader base.

Dosage:
Anurex in protective packaging should be stored in a refrigerator's freezer. After 2 hours of freezing the liner is ready for use. Its narrow tip should be greased with petroleum jelly and replace cartridge by following the instructions for use (on the packaging and leaflet inserts). One session lasts 6-8 minutes of cryotherapy, but Anurex may be used as often as needed entirely eliminating the need for other medical treatments. When you get your body temperature insert, remove and wash with soap under warm running water. Note: Do not pour boiling water or cook! You can sterilize and disinfect using specialized fluids. Store in the freezer, always in protective packaging.

IMPORTANT - what the patient needs to know?
Anurex insert is subject to personal use - can be used by only one patient. From the first freeze Anurex retains its properties for 6 months.

ANUREX works for both INTERNAL AND EXTERNAL HEMORRHOIDS

ANUREX was developed and initially patented in the USA, Canada, Australia, New Zealand, Mexico, Korea and other countries worldwide.

ANUREX was first registered with F.D.A. in 1986 following other registrations of Health Ministries and Regulatory Agencies around the World that include Canada, Australia,New Zealand, England, France, Italy, Poland , Spain, Colombia and Brazil.

Anurex was officially registered with U.S.A.  Dept. of Commerce in 1986 and featured  in many publications and Trade Shows (worldwide) sponsored by that Department.

ANUREX is the only available product of its kind on the market with proven efficacy and safety supported and documented by Controlled Clinical studies published in MAJOR Medical Journals.

Clinical trials proved Anurex to be effective in 85-95% in all patients.

Anurex has been widely accepted and recommended by doctors, pharmacists, Health professionals and Medical Media continuously informing hemorrhoid suffers about this…….

Copyright Apteka Zdrowie Poznań 2016. All rights reserved.
Back to content | Back to main menu