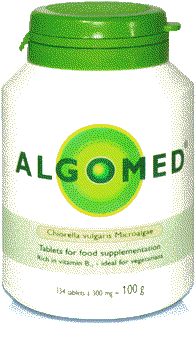 or better check Spirulina-Chlorella PLUS

Algomed - dietary supplement
Description:
Microalgae are among the oldest organisms on Earth. More than 2.5 billion years ago, these small marine organisms were a big part of habitat, thanks to its ability to photosynthesis. Health benefits of microalgae have been known for thousands of years in many cultures. Among other things, the Aztecs and Mayans used it as a supplement to their daily diet. The positive impact of these organisms is also the current fact in modern times, especially since Algomed® product, a number of important components are present in the pure, concentrated form, without content, environmental pollution, which is accompanied by other agricultural crops. More than 2,000 publications and studies prove this. Over 40,000 algae is known to modern science. Particularly robust freshwater algae, Chlorella vulgaris is a raw material for Algomed®.
Indications:
DETOXIFICATION
Multi-layered cell wall of Chlorella has a high absorptive activity in relation to environmental pollutants. So has the ability to bind organic toxins, as well as many heavy metals.
STIMULATION OF RESISTANCE
Systematic research on this phenomenon was conducted in the mid 60's in Japan. Were based on the observed fact that people regularly eating chlorella are much less prone to several infections. Clinical trials included more than 1,000 navy soldiers indicate a significantly reduced risk of colds.
NUTRIENT SUPPLEMENT
Microalgae and especially Chlorella play a key role in the food chain. Chlorella contains the right balance of key substances for human and animal physiology: minerals, vitamins, essential amino acids, unsaturated fatty acids, carbohydrates and fiber. What's more, there is evidence of unusually high content of active substances in Chlorella, the chlorophyll (the highest content among all living organisms) to polysaccharides, glycoproteins, carotenoids, and valuable, multi-layered cell wall.
Form:
The ALGOMED tablets are 9 mm in diameter and weigh 300 mg and are consequently easy to take.
Dosage:
The recommended daily intake is 10 tablets of 300 mg each, together with a little water.
Adults: 2 x 5 tablets per day (3 g / day).
Children from 6 years of age: 2 x 3 tablets per day (approximately 2 g / day).
Keywords: Algomed, micro-algae, chlorella, cleansing the body, detoxification, immunity, vitamin (B12), minerals, amino acids, essential fatty acids, protein, chlorophyll, fiber, dietary supplement, vegetarianism, for vegetarians.
Pharmacy | "Health" | Drugs on-line | Our offer | Your Health | E-Pharmacy | General Site Map

Copyright Apteka Zdrowie Poznań 2016. All rights reserved.
Back to content | Back to main menu